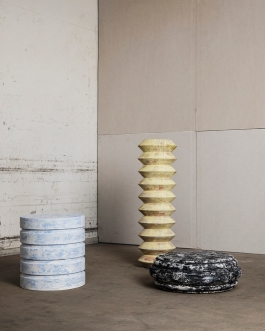 The starting point of this project is rooted in our interest in old stucco materials and moulding techniques. It has grown into a fascination with the two-dimensional line of the running mould technique being transformed through a specifically created turning machine into a three-dimensional object.

Every piece begins with a line and through the building up of material, the three-dimensional manifestation of that line is created. The objects are simultaneously built and decorated through the process of their making. The process of building up the layers to create the form is emphasized by using different pigments in each layer of the stucco material, making their creation very present in the finished object. The resulting objects are ambiguous pieces that exist somewhere in between function and sculpture. 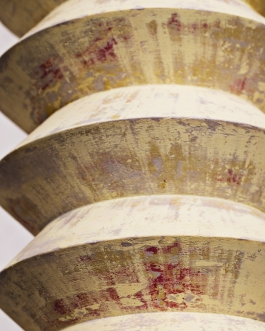 For me to reform is... To keep experimenting with both the known and the unknown.

Flensted Mouritzen is a design duo consisting of designers Troels Flensted (DK) and Ragna Mouritzen (DK). Revolve is their first project as a duo. In their own individual practice both designers work experimentally with materials, colors and ways of making.

They both graduated in 2014 from University of the Arts London (Central Saint Martins & Camberwell) and Ragna Mouritzen is currently finishing her MA studies at The Royal Danish Academy of Fine Arts.

Individually the two designers have won several talent awards, including Talent á la Carte 2016 by Maison & Objet, Embassy Art Prize 2014 and Talent of the Year 2017 by Bo Bedre. They have each showcased their work in numerous solo and group exhibitions through out Europe and received a number of grants.