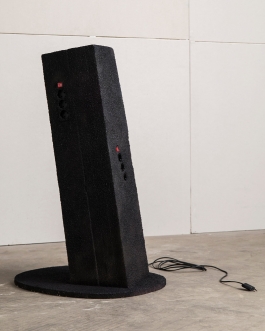 There is a coat hanger, a temporary seating and even some plugs to charge your phone. It looks like a waiting room, but something is off. As if these object were extracted from a fictional world. Sometimes it is necessary to project oneself into another world, a place where not all the rules apply. To allow yourself to get rid of constraints.

But we recognize a piece of polystyrene – and a cardboard tube, strangely assembled. Large-scale collages of materials from our modern times, but with materials that do not seem to be made for objects: polystyrene, cardboard, small pieces of foam and more. Can these be raw materials of the 21st century? At least, someone made the effort to solidify these materials. A thick layer of glue and sand seem to petrify the objects in stone. A process that seem to allow spontaneous constructions to be consolidated. Now anything can become a possible building block. 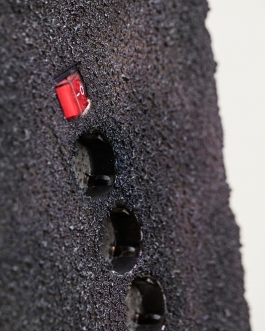 For me to reform is to... Be able to overturn habits and alter the expected. To look at materials for what they are and not what they represent.

Thomas Ballouhey (NL) is an Object Designer focused on experimental means of production. He graduated from the Contextual Design Master Course of the Design Academy Eindhoven in 2016.

His working process could be summed up by a quest for alternative methods of production. His practice revolves around altering materials and techniques. By exploring techniques from other angles, his work shows what our landscape of objects could have been, imagining unknown artefacts if we had decided to take an unexpected turn at one point or another.